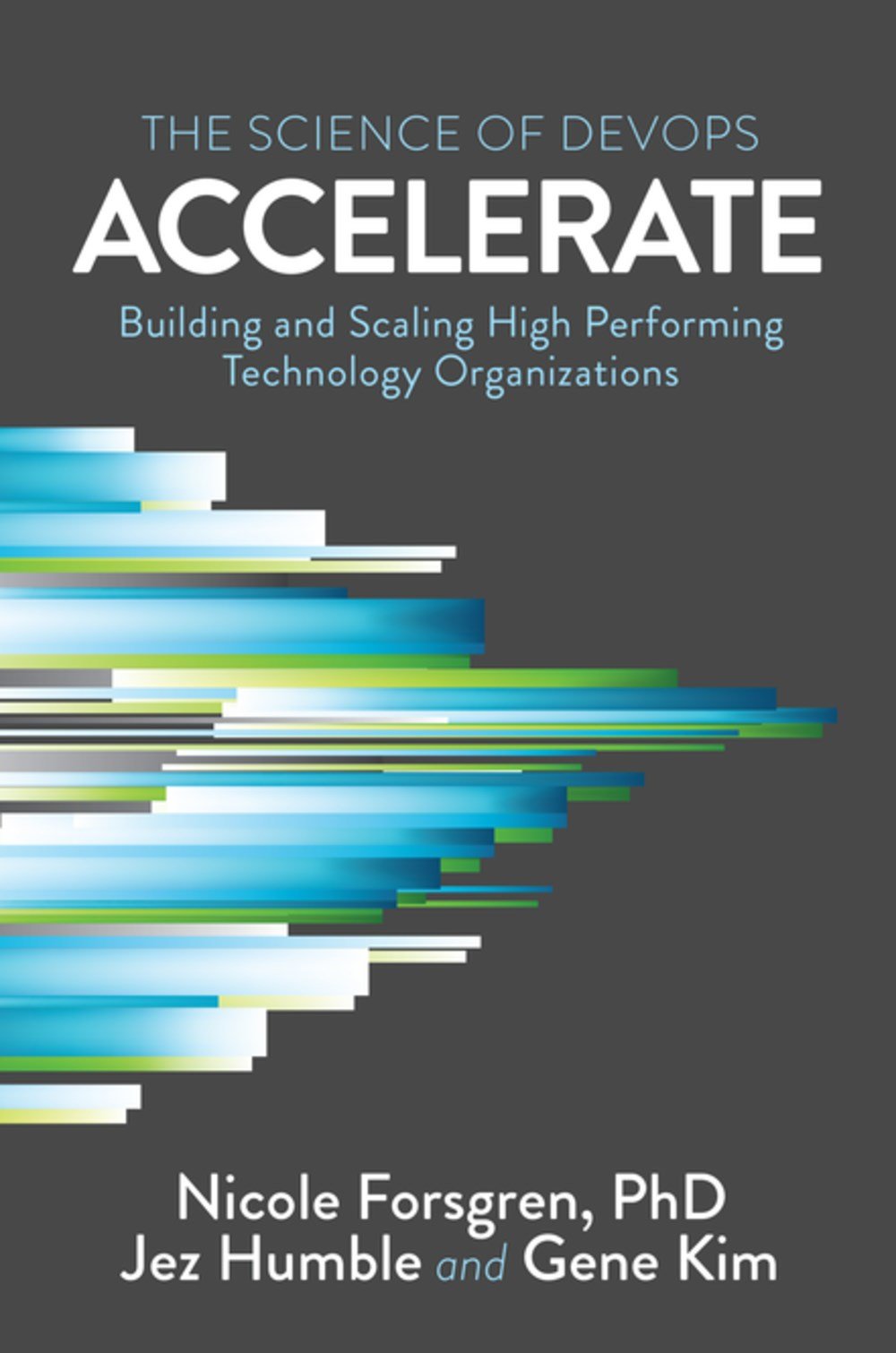 Jenkins X is a reimagined CI/CD implementation for the Cloud which is heavily influenced by the State of DevOps reports and more recently the Accelerate book from Nicole Forsgren, Jez Humble and Gene Kim.

Years of gathering data from real world teams and organizations which has been analyzed by inspiring thought leaders and data scientists from the DevOps world. The Accelerate book recommends a number of capabilities that Jenkins X is implementing so users gain the scientifically proven benefits, out of the box. We’ve started documenting the capabilities that are available today and will continue as more become available. 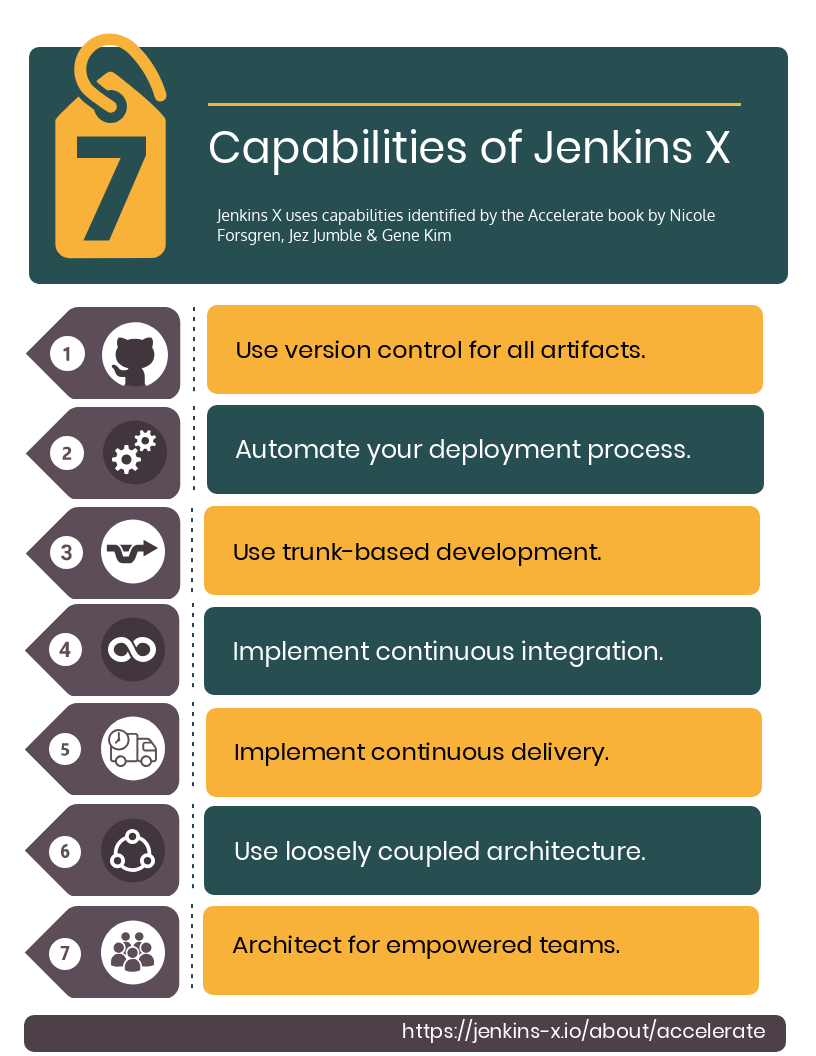 Use version control for all artifacts

Related Accelerate capability: Use version control for all production artifacts

Out of the box Jenkins X creates Staging and Production (this is customizable) permanent environments as well as temporary environments for preview applications from Pull Requests.

We are trying to move as much testing, security, validation and experimentation for a change before it’s merged to master. With the use of temporary dynamically created Preview Environments any Pull Request can have a preview version built and deployed, including libraries that feed into a downstream deployable application. This means we can code review, test, collaborate better with all teams that are involved in agreeing that change can go live.

Ultimately Jenkins X wants to provide a way that developers, testers, designers and product managers can be as sure as they can that when a change is merged to master it works as expected. We want to be confident the proposed change does not negatively affect any service or feature as well as deliver the value it is intended to.

Where Preview Environments get really interesting is when we are able to progress a short term PR through various stages of maturity and confidence where we begin to direct a percentage of real production traffic (either shadow traffic or even beta users). We can then analyze the value of the proposed change and possible run multiple automated experiments over time using Hypothesis Driven Development. This helps give us better understanding of how the change will perform when released to all users. Though we need to make sure PRs stay short lived for trunk based development; lets try avoid PRs turning into long term feature branches!

Using preview environments is a great way to introduce better test automation. While Jenkins X enables this we don’t yet have examples of automated tests being run against a preview environment. A simple test would be to ensure the application starts ok and Kubernetes liveness check pass for an amount of time. This relates to

In software development we’re used to working with multiple environments in the lead up to a change being promoted to a live production environment. Whilst this seems business as usual it can cause significant delays to other changes if for any reason that it is deemed not fit via some process that didn’t happen pre merge to master. Subsequent commits then become blocked and can cause delay of urgent changes being promoted to production.

As above Jenkins X wants any changes and experiments to be validated before it is merged to master. We would like changes in a staging environment to be held there for a short amount of time before being promoted, ideally in an automated fashion.

The default Jenkins X pipelines provide deployment automation via environments. These are customizable to suite your own CI / CD pipeline requirements.

Jenkins X recommends Staging should act as a near as possible reflection on production, ideally with real production data shadowed to it using a service mesh to understand the behavior. This also helps when developing changes in preview where we can link to non production services in staging.

The Accelerate book found that teams which use trunk based development with short lived branches performed better. This has always worked for the Jenkins X core team members so this was an easy capability for Jenkins X to implement when setting up Git repositories and CI/CD jobs.

Jenkins X sees CI as the effort of validating a proposed change via Pull Requests before it is merged to master. Jenkins X will automatically configure source code repositories, Jenkins and Kubernetes to provide Continuous Integration out of the box.

Jenkins X sees CD as the effort of taking that change after it’s been merged to master through to running in a live environment. Jenkins X automates many parts in a release pipeline:

Jenkins X advocates the use of semantic versioning. We use git tags to calculate the next release version which means we don’t need to store the latest release version in the master branch. Where release systems do store the last or next version in Git repos it means CD becomes hard, as a commit in a release pipeline back to master triggers a new release. This results in a recursive release trigger. Using a Git tag helps avoid this situation which Jenkins X completely automates.

Jenkins X will automatically create a released version on every merge to master which can then potentially progress through to production.

Jenkins X aims to help polyglot application developers. Right now Jenkins X has quickstarts and automated CI/CD setup with language detection for Golang, Java, NodeJS, .Net, React, Angular, Rust, Swift and more to come. What this also does is provide a consistent Way Of Working so developers can concentrate on developing.

Jenkins X also provides many addons, for example Grafana and Prometheus for automated metrics collection and visualization. In this example centralized metrics help understand how your applications behave when built and deployed on Kubernetes.

DevPods are another feature which enables developers to edit source code in their local IDE, behind the scenes it is then synced to the cloud and rapidly built and redeployed.

Jenkins X believes providing developers automation that helps them experiment in the cloud, with different technologies and feedback empowers them to make the best decisions - faster.